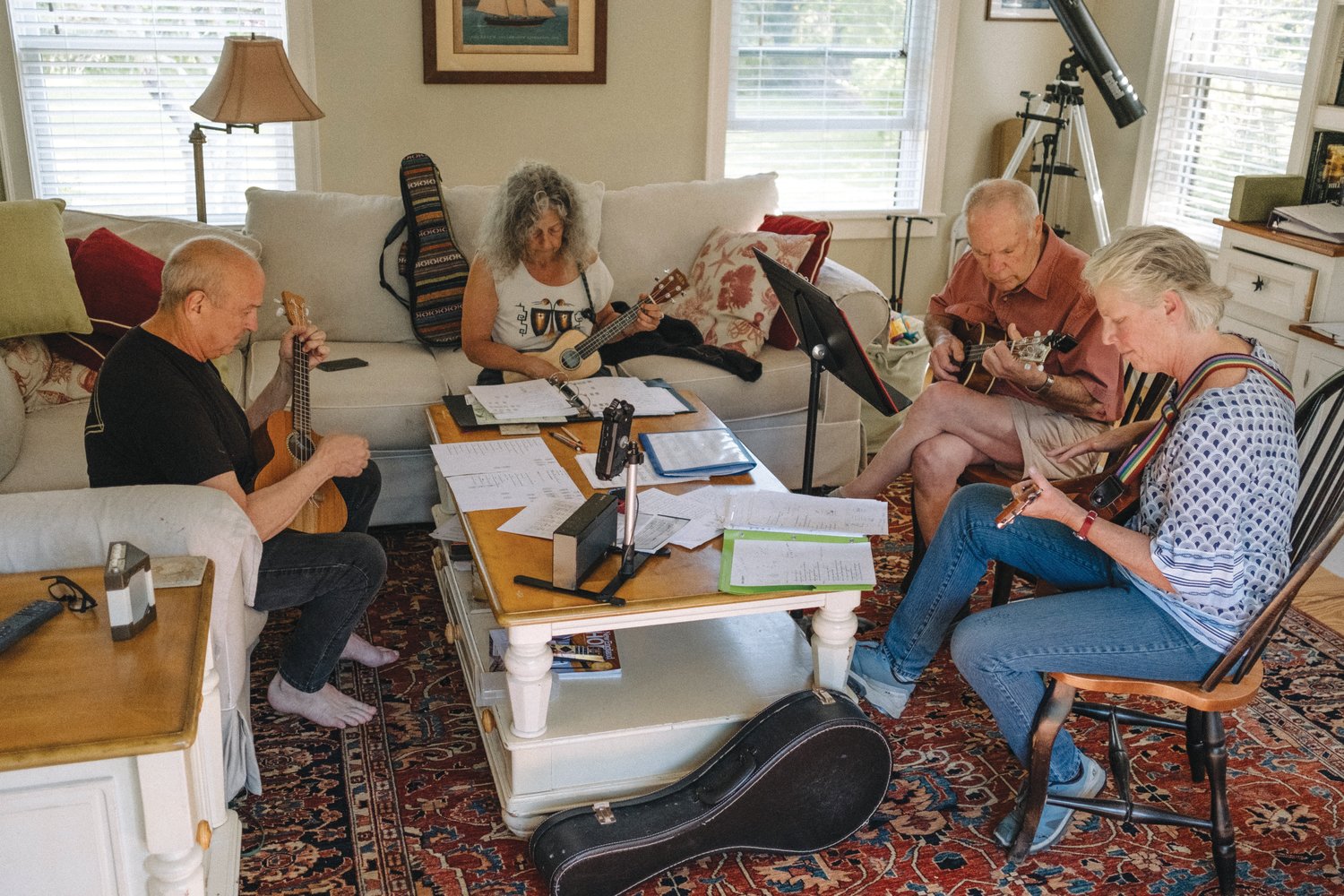 It is Wednesday evening in Tim Parsons’ living room, and the instrument of choice looks like a short-necked sort of mini-guitar, with four nylon strings. The ukulele is more associated with Bing Crosby crooning  “Mele Kalikimaka, the Hawaiian Christmas Song,” than The Talking Heads’  “Psycho Killer.”

But this is music as fellowship, a group of former students of the late Andy Bullington, meeting every week to rehearse and keep their teacher and band leader in their memories.

Bullington, the island guitarist, music teacher and composer who played in local bands The Shingles and Earth’s Got the Blues, died Dec. 6, 2020, after a three-year battle with Amyotrophic Lateral Sclerosis (ALS). He was 70.

He had taught everyone in Parsons’ living room that night to see the ukulele on a different level, to make it into an instrument capable of much more than whatever your image of it is.

Even as his health declined, even when he could no longer play his instrument, he remained part of the music and part of the group by showing up every week for a bit of teaching, music and conversation.

The band could not fathom continuing after his death. Then, six months later, they got back together to play ukulele versions of “Here Comes the Sun,” and “Stairway to Heaven” at his memorial. It got Parsons thinking the music didn’t have to be over. He knew Bullington would be there in spirit.

This spring, the ukulele group found an opening at a Thursday-night open mic at Lemon Press. They had practiced the night before at Parsons’ house, playing the song “Creep.” They introduced themselves at the open mic under a new name: Ripe for the Pickin’.

It was decided then and there that everything the band would do would be in memory of their former bandleader.

“There isn’t a Wednesday that goes by that we don’t start talking about Andy this or Andy that, or how he would play a song,” Pam Murphy said.

“When we’re together, everybody is supportive of each other. Everybody has different levels of ambition. We’re just happy to be there, and particularly happy it all came together again after Andy passed away because we all adored Andy.”

Bullington was 15 when he bought his first guitar, from the United Diamond Exchange Pawn Shop in Roanoke, Va. He studied at Berklee College of Music in Boston. He taught lessons for kids at the Nantucket New School, and for kids and adults at the Nantucket Community Music Center. He played lead guitar for Earth’s Got the Blues, the Glazer/Bullington Duo and The Shingles, where he played with his wife, Cary Hazlegrove. He scored the music for several films, including John Shea’s “Grey Lady.”

Music, in short, was everything to him.

Even when his health started failing, he still showed up at the Wednesday ukulele sessions with an iPad and a list of songs to play, offering feedback on how to play them.

“Sometimes when I play gigs I almost think I hear him whispering chord changes in my ear,” Mollie Glazer said. “That’s how he stays with me. He’s whispering to me.”

Murphy also finds a connection to her friend and teacher’s memory when she picks up her ukulele and plays.

“The last thing he worked on was helping each of us do solos and I found that so inspiring because it was always a mystery to me,” she said. “I made a leap forward. It was so encouraging. He wouldn’t say we were great. He let us know if we were falling down on the job or not keeping up. Not that he was unkind. He just knew everything that was going on.”

The band came back to the open mic one week after they played “Creep” with a ukulele cover of “Tequila” by The Champs.

Parsons, who took over for Bullington in Earth’s Got the Blues in his final months, credits Bullington for giving the band its direction and its sound.

“I’m a whole different player now than I was before I met Andy,” he said. “He was a phenom. I could go through any song and he would punch it up and show me something I had never seen before.”

The group comes from all walks of life. Parsons makes lightship baskets. Dunbar is a preschool teacher at Small Friends on Nantucket. Murphy sits on the board of the Marine Mammal Alliance Nantucket and Nantucket Island Safe Harbor for Animals. Finn works at The Green Lady dispensary.

“Our ukulele sessions were very lighthearted,” Parsons said. “I never felt like I was going to a guitar lesson, which I was always nervous about. We always had a great night. You leave feeling a lot happier than you do when you show up, and you meet a lot of close friends. Mostly we’re catching up and chatting.”

It’s up to the band to determine where they go from here. Parsons and Murphy say they are considering a handful of performances at the Atheneum. They’re also open to the idea of expanding the group to include new members at the Wednesday practices.

“I always wanted to play in a band, and then life goes on, and the next thing you know I'm in a ukulele band,” Murphy said. “It wasn’t the band I always envisioned. But it’s so much fun to play with other people.”