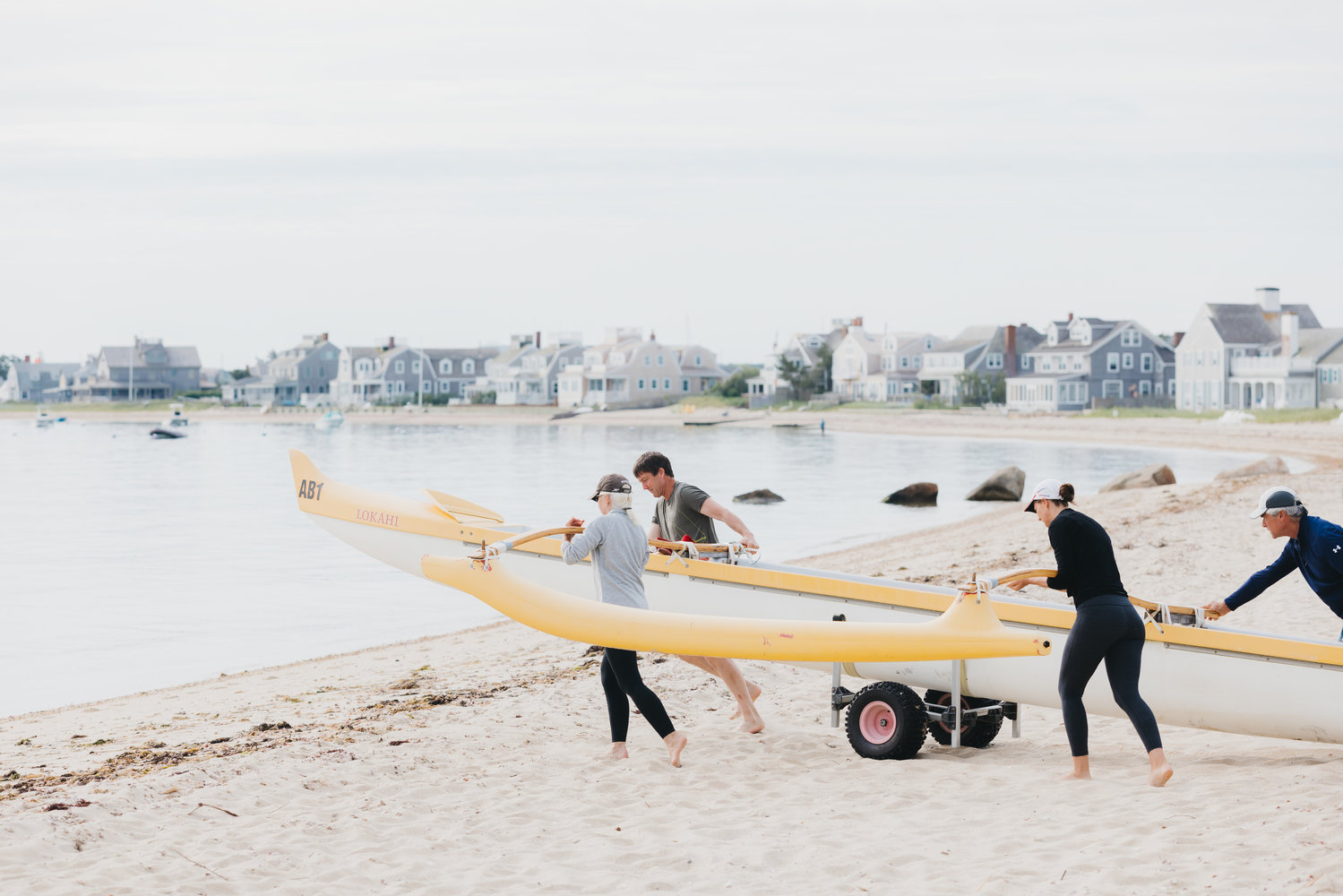 Outrigger canoes are unlike anything you would associate with the whaling traditions of old Nantucket. They are not traditional oar and oarlock boats. You are paddling instead of rowing. They echo a Hawaiian tradition rather than a whaling tradition.

For over 20 years a group of Nantucketers, currently about a dozen strong, have paddled around the island and elsewhere on the East Coast on these simple and versatile canoes.

One Saturday morning in June, I joined the group for their weekend paddle and witnessed firsthand the camaraderie, the spiritual appreciation of the water and especially the workout that comes along with operating an outrigger canoe.

The excursion started around 8 a.m. with lifting the canoe, or wa’a as it’s known in Hawaii, on its side to drain the rainwater from the previous evening out of the boat. Once the insides of the two canoes were dry, the crew pushed both vessels down to the edge of the water to the right of Jetties Beach.

Chis Emery, one of the most experienced members and a former leader of the group, gave a quick demonstration on the proper stroke to myself and another pair of newcomers, Frank and Peggy McGillin, before we split up into two groups of four.

I joined Emery and two other members in a canoe named Lokahi, the Hawaiian word for unity. The other group hit the water in the canoe named Mauli Ola, which signifies the power of healing and health. Hawaiian culture plays an important role in outrigger culture, to be expected considering the boat emanates from the island by way of Polynesia. The outrigger canoe is responsible for the original habitation of Hawaii as the Polynesians first ventured to the island about 1,000 years ago via the vessel.

“I was reading about it the other day and researching it a little more and the Polynesians were traveling 10,000-square-mile areas before the Europeans even knew how to navigate and leave sight of shore,” Emery said.

The paddle trip started with a call of “Huki,” which means pull in Hawaiian. Emery manned the back seat of the canoe and would call out “Hut” to prep each paddler to switch sides following the next stroke and then “Hoo,” which notified everyone to quickly switch hands and leg positioning. There’s also the term “huli” to describe a flipped canoe, which thankfully wasn’t heard during our paddle.

The lone English phrase Emery would call out at times was  “All together” when someone – mainly just me— fell out of sync with the rest of the group.

Synchronization is key when you’re paddling an outrigger. Ideally, everyone’s stroke is perfectly timed together, each blade hitting the water and emerging from the surf in unison. Otherwise the canoe can feel choppy, as though it’s being jerked in different directions.

Our trek covered about 4.5 miles as we went out and around the jetties, paddling for about an hour before taking a 15-minute break on the beach and then paddling back to the starting point. When you’re out on the water and away from the noise of cars cruising down the road or music blaring from someone’s back yard, you can’t help but get lost in the natural beauty of Nantucket Sound.

“For me it has a great place in my heart. There’s a spiritual aspect to it that’s just right in your face,” Emery said.

The Nantucket outrigger group started informally around 1999, when Teryl Chapel brought two four-person canoes to the island. At that time there was a heavy focus on competition but over the years the paddlers became more of a social group, Brooke Meerbergen said.

The beauty of outrigger canoes is the fact they are both simple and versatile, he added. While all you need is a paddle, the group has experimented with rigging the canoes with a sail and a kite-board kite.

“It’s a little bit more of an adventure than a standard kayak or a rowboat, which I think are kind of limited to certain areas in the harbor,” Meerbergen said. “There’s definitely a lot of skill involved as you go into more challenging conditions. You have to learn about body shifting and body weight and it’s just a little bit more of an active approach to paddling.”

The group has no shortage of routes to take along the island, thanks to the canoes’ versatility. The path of each paddle, generally around five miles but sometimes longer, can be determined by the weather and the current. Past trips include paddling around the jetties, both sides of Coatue and even all the way up to Great Point. When the wind is particularly strong the group will paddle close to the shore near town where they are protected from the gusts and traverse down to the Creeks or Pimny’s Point, Emery said.

“What’s nice about going for a while is you do have those moments where you’re just forgetting about everything,” he said. “You’re pretty much just in the boat and sometimes it’s just the sensations and the sounds and sights (of the ocean). That’s why we like it so much.”

In the past the group has participated in races in New York City put on by the East Coast Outrigger Racing Association, a network of outrigger groups that spans the eastern seaboard from Boston to Fort Lauderdale, Fla. The group now mainly focuses on its regular Tuesday, Thursday and Saturday paddles around the island, with some special excursions from time to time to Tuckernuck and Muskeget.

Nowadays the boats are made out of more modern materials like fiberglass, carbon fiber and Kevlar, but the original Hawaiian outrigger canoes were all made of Koa wood, a tree native to the islands.

“There’s a whole ceremony when they would harvest that tree. I mentioned the spiritual end of things, it was very integral to their lives and it had deep meaning so that’s not completely disassociated from even modern canoeing,” Emery said.

Paddling outrigger offers a completely different perspective of the island and its surrounding waters, providing a serene experience you won’t get on a motorboat with its engine whining. Not to mention it’s quite the workout, leaving nearly every muscle in my arms, core and back sore for the rest of the day following our two-hour paddle.          Fellow newcomers and experienced kayakers Frank and Peggy McGillin were already looking forward to their next outrigger paddle after we finished.

“It’s something we could never experience on our own. Where would we have Hawaiian outrigger canoes? Where else would you ever have the experience to do that?” Peggy McGillin said.