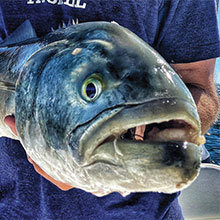 When I close my eyes and picture fishing on Nantucket, it involves multiple people, standing shoulder-to-shoulder in the surf, casting into a big school of bluefish, as the sun sets on the horizon.

There is nothing like seeing a big school of fish pushing along the surface less than a cast away. Once the first angler puts a top-water plug into those fish and you see an explosion, the line goes tight and the rod bends, you know it will be a domino effect.

Nantucket blues. I love everything about them. I love their yellow eyes, their strong jaw, their distinct coloration. I love how they attack a plug and I love how they fight when they are on your line.

The first fish I ever caught is still one of my first perfectly-clear memories. We were staying with close family friends in Quidnet. It was a windy, rainy day and I was 5 years old. We packed the old red Suburban and drove out to Great Point. My father was casting an 11-foot Bill Fisher custom rod, and I was using a nine-foot rod, loaded with a Hopkins and a buck tail.

We were on the west side of the point in an area called the Galls. I was casting into the wind, and looking back I would be surprised if I was casting it more than 20 feet. But I wouldn’t quit until my older brother did, so I just kept casting. Suddenly, I was the first to hook up from our crew. I remember everyone standing around cheering me on.

My godfather, Hugh Halsell, was in my ear coaching me through the experience. He taught me to walk the fish onto the beach and let the waves do the work. When I saw the flopping fish on the beach, I dropped my rod and reel, much to the ire of my father, and leaped up and down like I won the Super Bowl.

We kept that fish and it felt amazing to feed it to the family that night. Even better though, was fishing with all of our crew, for hours on end, after that first fish was landed.

We start to see bluefish show up every year around Memorial Day weekend. It’s actually scary how you can set your watch to it. They first fill in to our northern waters and then fill in around Great Point.

The floodgate opens for blues all around the island at about the same time our inshore bass population starts to push further offshore. Generally, this is the end of June. July and August are our peak fishing periods for these beautiful fish, which is why they have long been associated as the fish of Nantucket summer memories.

We’ll see smaller numbers of fish stay active in our fishery until the first big nor’easter of October, at which point they generally push offshore into warmer water, and we can put our surf rods up for another season.

You’ll often see the smaller fish in the main harbor or in Madaket. The more average-size fish, two to three pounds, can often be found around Great Point or in other northern rips. A great deal of these fish sit off the east and south side of the island in 30 to 40 feet of water. They range from five to 12 pounds and are extremely active. The big fish that show up in the fall tend to be found in the bigger, more active water off Sconset and out toward Old Man Shoal.

I can remember fishing a rip and thinking that I had hooked a huge striped bass. My rod was literally doubled over and I had very little control of the fish. It stayed under the surface for a good six minutes before an unmistakable jump just off the boat.

When I boated that 20-pound fish, I was elated. My friend thought I might be a bit disappointed that I had not hooked a big old bass. My reaction was quite the opposite. The bluefish had given me an incredible fight. And he was something to see.

In general, our bluefish are bigger, more active and more accessible than anywhere else in the Northeast. These fish are the cornerstone of our world-class fishery. They give anglers the opportunity to catch an exciting fish at all points of the summer.

My favorite way to target bluefish is from the shore in the evenings. These fish are right in close to shore and are extremely aggressive when feeding. I’ll either use a top-water plug with a ton of action or a heavier Hopkins so that I can get more distance on my cast. I always use single hooks. I’m a catch-and-release fisherman and these fish are so aggressive in their takes, that anything more than one hook is often unnecessary and can damage the fish’s mouth. My favorite spots are Surfside and down through Nobadeer, and on the east side of

Great Point. Both locations are very predictable throughout the season. In general, bluefish will be a little further offshore during the day but during low-light periods, dawn or evening, or even rainy days, they will sometimes push right up close to the beach. I use a longer rod, nine to 10 feet, when I target blues, because it allows me to cast a heavier plug further.

From the boat, you can have days that will absolutely leave your arm tired and rival any fishery in the world. I’ve had a group of anglers catch over 100 fish in a tide, all on top-water plugs and all giving incredible fights.

It is a thing worth remembering to see a school of bluefish roiling the water’s surface. At times there can be literally acres of them, thousands of fish all feeding together. On perfect days, you can see these fish finning on the surface.

On most days with a little wind, you’ll see a slick on the surface which often carries a very distinct odor. The smell is akin to freshcut grass, or some say it smells like watermelon. It is extremely sweet. These fish are simply feeding so hard that often they regurgitate their forage and the oil slick on the surface is the remnants of this.

While bluefish are traditionally plentiful, we have had some years where we have not seen many fish. Luckily, last year was a bounce-back year, but for three years, there were tides where it was difficult to find these amazing fish.

It was a reminder that while these fish have forever seemed like a renewable resource, they are in fact part of a fragile ecosystem. We need to respect this fishery and not take it for granted.

Cooked right away and properly prepared, bluefish can be delicious. But if you do not intend to eat them, they should be handled with care and released. People too often want to keep a fish just because they caught it, but more fish end up getting thrown into the garbage than you would imagine. The fish in our local waters, due to their size, are breeders and need to be protected.

Sometimes we get the kind of fish snobs who only want to catch a specific type of fish, and many times bluefish are not on that list. I always get a kick out of it when those people hook into a bluefish and enjoy the fight. Then I ask them how it compared to other fish they have caught. They always say it was amazing.

We often joke that if we could create a perfect fish on paper, it would be super-aggressive when taking a lure, gives a hard fight with jumps, so that it is visual, isn’t too big that you have to fight it too long, and is accessible enough that you can catch it with regularity. The bluefish fits all of those categories and many times does feel like the perfect fish. ///

Cam Gammill writes “Fish Finder” for The Inquirer and Mirror. He is the co-owner of Bill Fisher Tackle and Fisher Real Estate.