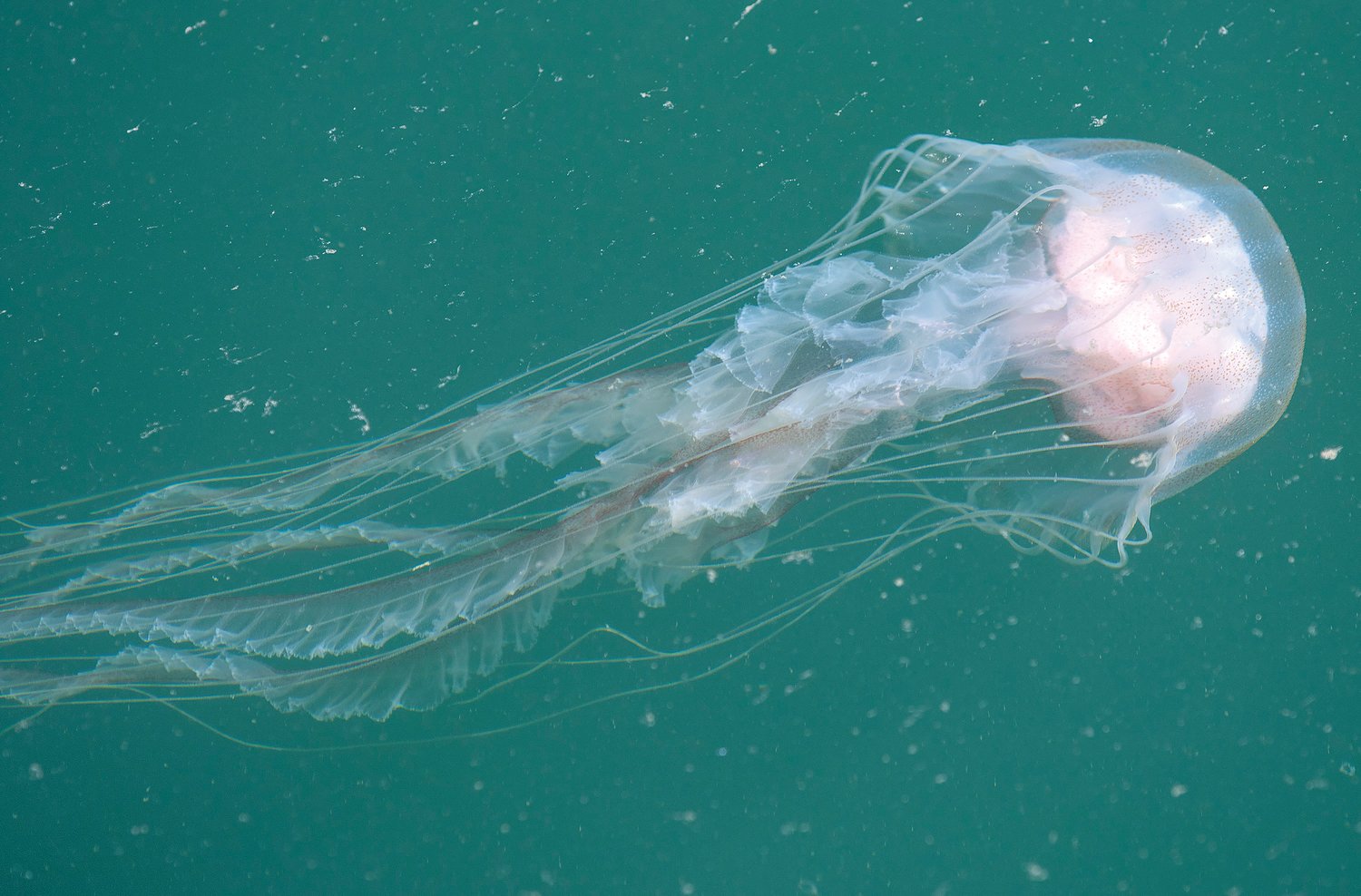 Great white sharks get all the press, generate all the fear, send people scurrying out of the ocean on rumors or actual sightings. Everybody has seen the movie “Jaws” and nobody wants to mess with that.

In the last four years, however, the waters around the island have been besieged in the summer with an ever-increasing number of another ocean-going creature that it is best to stay away from: jellyfish.

For all the concerns about sharks, thankfully nobody on Nantucket has been attacked. Jellyfish stings are a different story. And the jellyfish have been arriving in our waters earlier and earlier each year.

Then there is the Portuguese man-o-war, with its gas-filled bluish-purple sail floating above the water, and deep-blue venomous tentacles reaching deep below the surface. The Portuguese man o’ war is a fascinating and alien sight that was not often spotted around the waters of Nantucket until the last few years.

In this region, the man-o-war’s sting is the most painful by far. They leave red whip-like welts on the victim that can lead to scarring. Jack Dubinsky, the Maria Mitchell Association’s aquarium director, said in rare instances, people who get wrapped in a man-o-war’s tentacles can suffer life-threatening injuries.

He prefaced that by saying that usually occurs with larger specimens with tentacles in excess of 30 feet. The ones that have been spotted on Nantucket usually have much smaller eight- to 10-foot tentacles, and while they still back an incredibly painful punch, they are much less likely to be life-threatening.

Although the man-o-war has the most painful sting, the Atlantic sea nettle is the jellyfish that has racked up the most stings on the island.

“I personally have not been stung by a man-o-war, it’s pretty intense. They have been associated with fatalities in humans, and I don’t think the Atlantic sea nettle’s sting has ever been associated with a fatality,” Dubinsky said. “An (Atlantic sea nettle) got me on my face when I was transplanting eelgrass in the harbor, and then it went over my scuba regulator on my mouth and I looked like the Joker with the crooked smile.”

Dubinsky said the pain wasn’t debilitating, but an intense burning sensation that lasted for about five minutes, before becoming moderate burning for the next 20 minutes. After that it become more tolerable and he went back in the water.

“For someone who has never been stung before it can be a scary stinging sensation,” he said. “But it’s not too bad, at least when I got stung.”

The Maria Mitchell Aquarium has a renewed focus on jellyfish, with a new cylindrical jellyfish tank and new breeding equipment, Dubinsky said. He is curious to see when the jellyfish arrive this year. Given that the water has been cooler, there is a possibility they will arrive later in August.

Last year, 42 Portuguese man-o-war washed up on the shores of the island in the beginning of July. A decade ago, man-o-war sightings were rare on Nantucket. They are usually spotted at the tail end of summer. To have that many wash up in the first week of July was unusual.

It is common safety protocol that if anyone sees a man-o-war in the water, they should get out immediately. Because their tentacles can reach up to 100 feet in some extreme cases, just avoiding the sail might not be enough.

Although it is often mistaken for a jellyfish, given that it shares many of the same characteristics, the Portuguese man-o-war is actually a siphonophore, meaning it is made up of a colony of four separate organisms, each with distinct, specialized parts.

Even when they are out of the water, washed up on the beach, or a tentacle has been torn off, they can be dangerous. Detached tentacles and those that have washed on shore can remain potent for hours or even days.

Dubinsky said he believed the unusual activity last year was due to tropical storm activity. Their numbers did fall off for the rest of July, only to come back for their regularly scheduled appearance in August.

It’s hard to say exactly what is causing the consistent trend upward.

“Jellyfish are plankton, so their position on a map at any given point is subject entirely to environmental forces, tides, winds, currents and things like that,” Dubinsky said. “One year they might be more dilute and one year they might be sitting in an eddy off the Gulf Stream concentrating before they get blown out (to Nantucket). Sometimes they could be blown offshore and not appear at all in a certain place. It varies quite a bit from year to year when you’re talking about planktonic species.”

In mid-August last year, there were days when every lifeguarded beach on the island was flying purple flags, signifying the return in full force of jellyfish. That was mostly for Atlantic sea nettles.

Identified by their semi-transparent bell-shaped white bodies with reddish-brown spots and long tentacles, sea nettles have been arriving on Nantucket earlier in the last two years, and as a result are being seen in greater numbers during August, when there are more people swimming and playing in the water.

Atlantic sea nettle stings produce a painful rash with peak intensity lasting up to 20 minutes. A few of the stings last year were severe enough to warrant an ambulance call, but the vast majority are treated on the spot with hydrocortisone, harbormaster Sheila Lucey said.

With sea nettles, size matters. The larger the tentacles, the more concentrated the venom is. The largest Dubinsky has seen around the island had tentacles over two feet long.

But the smaller ones, about eight inches in bell diameter that are kept at the Maria Mitchell Aquarium, he can handle with his bare hands and hardly ever have a reaction.

“It really depends on their size and I think everyone reacts to them differently,” he said.

If you do get stung the National Oceanic and Atmospheric Administration recommends flushing the sting area well with cold ocean water and then applying vinegar or an over-the-counter commercial product if pain continues.

Lion’s mane jellyfish are the dark red and crimson species known for their thick, trailing tentacles that often look like a lion’s mane.

“From what I understand, similarly-the sized sea nettle is a more painful sting,” he said. “The nettles are usually here until October and the lion’s manes come and go more quickly, usually in about four weeks.”

Due to the wandering nature of jellyfish, it is hard to predict what their activity will be from year to year, Dubinsky said. Last year the sea nettles began to dissipate in mid-September and were gone by early October.

Tony LaCasse, spokesperson for the New England Aquarium in Boston, said that jellyfish density can be fairly localized depending on nutrient availability.

“It’s usually not a good thing, it’s when you have phosphate runoff,” he said. “Usually when we hear about a high density of sea jellies, it’s usually because of combined sewer runoff (after a heavy rain). If that happens early in the spring or summer that’s when you see jellyfish bloom, because all of a sudden, they have a lot of extra nutrients available.”

From those looking to avoid jellyfish stings, Dubinsky said from his experience there tend to be less in the harbor than on the south shore. And the harbor has the added benefit of calmer water, where it becomes easier to spot and avoid jellyfish.