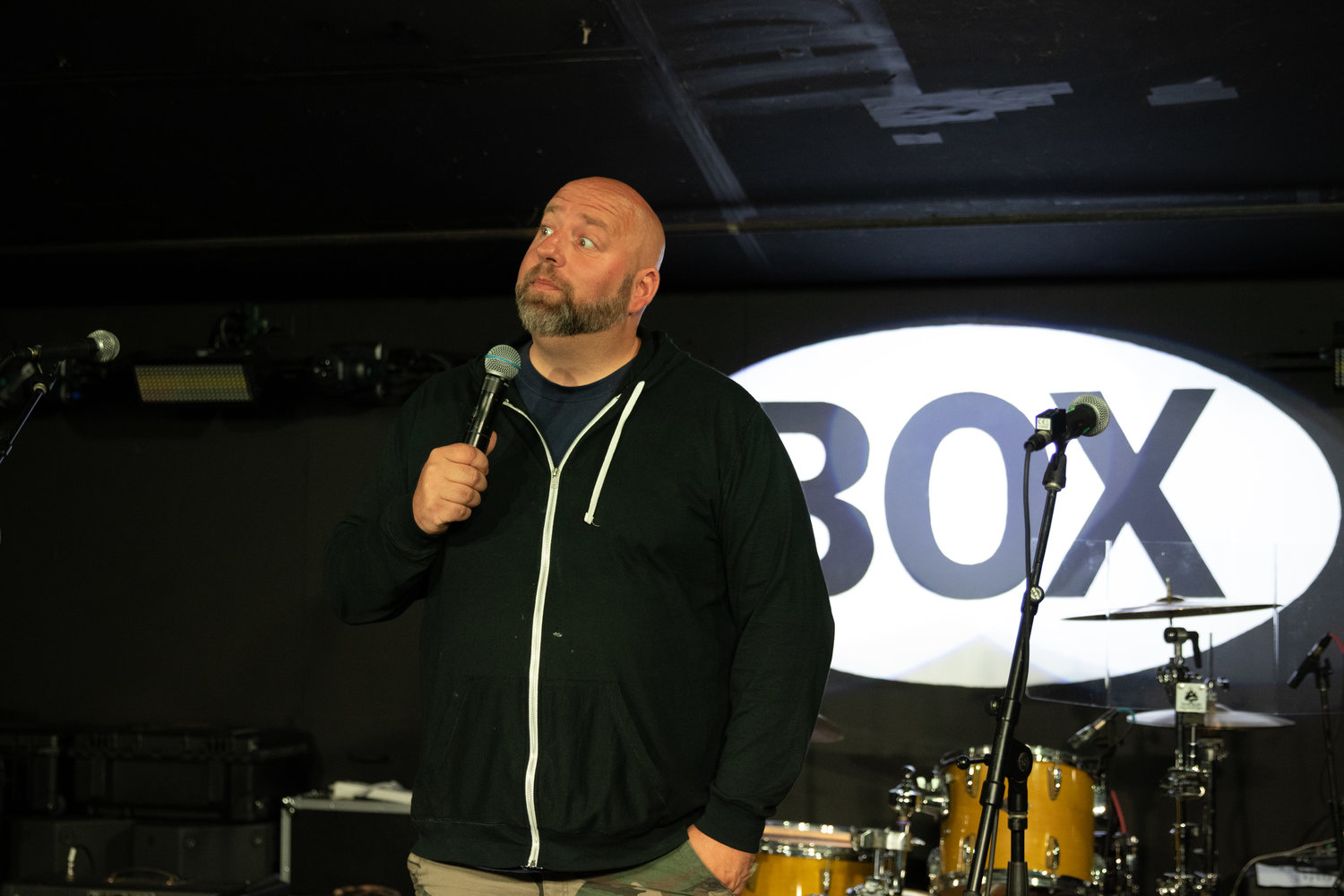 Just days before the biggest show of his life, Brian Glowacki is surprisingly calm. But that’s the way he operates. Even backstage, moments before the show, he would not be much different.

“For as animated and as crazy I can get on stage, if you saw me before I go on stage you would probably see me slumped in a chair with the worst posture you’ve ever seen,” he said. “Completely quiet, just charging my batteries.”

The change comes when the cold steel of the microphone touches his hand, the lights shine on his bald head and hundreds of eyes and ears focus on him. He transforms.

“Then it just turns on, the energy just kind of flows through me,” he said. “The best nights are when you’re in the zone, the crowd is in the zone and it’s all happening to everyone at the same time.”

Headlining his own show at the historic Wilbur Theater in Boston, which happened June 4, is something very few comics of his stature have ever attempted. The day we spoke, an early afternoon at The Chicken Box, one of the island bars where he got his start, he had already sold over 700 seats for the show.

That number was already a massive win. It erased any doubts that Glowacki, an independent comedian, who does not have an agent, and who isn’t seen on television, can look out at an audience from the same stage that countless A-list comedians have played, from Chris Rock to Bill Burr.

“Normally people on my level are trying their hardest to sell 150 or 200 seats at a club. So, I can’t even fathom how crazy this is,” he said. “You can look through and see other people with big names, or who are on TV right this minute that aren’t selling that many tickets. And I think it just speaks to the grass-roots thing I’m trying to do.”

Glowacki found his way to the stage with a band. It started in the early 2000s at the now-closed Bamboo Supper Club, the former bar and nightclub on Chin’s Way run by Shannon Haddon. It’s Haddon who Glowacki credits with getting him up on stage for the first time. He quickly found out he wasn’t the next “American Idol,” but he was funny.

“All the creative things I’ve started is because of Shannon just telling me to get up there on stage and do it. He gave me such a push to play music in public,” Glowacki said. “I would often banter with the crowd between songs and (my bandmate) Jacob Williams said why don’t you just do standup? The banter was probably way better than my singing. The main thing was just getting comfortable in something I was terrible at. Nobody would ever see me and say, ‘Wow, what a great singer.’ But they would say, ‘That was fun’.”

Comedy was always in his blood. Glowacki said he used to get in trouble all the time in school on Nantucket for cracking jokes. Even though he was always interested in stand-up comedy, there was no outlet for it on the island. In 2011, he took a standup comedy class in Boston.

Glowacki said he wasn’t funny at first. But he had stage presence, something very few of the other budding comedians had. Those experiences, playing at the Bamboo or hosting Air Band at The Muse turned out to be invaluable.

“My jokes were terrible,” he said. “But just knowing how to be on stage and deal with a crowd I was so far ahead of the other people doing it. Getting over stage fright is half the battle and that can take people years, so I felt like I was starting on third base.”

That ability to be comfortable on stage allowed him to be a host. Often at comedy shows in the U.S. there will be an opener, a middle act and a headliner, and in between a newer comic will host, moving the show along and introducing the acts. That was Glowacki. It allowed him early on not only to make some money but also to perform some material between acts and get his feet wet.

It was rough in those early days, Glowacki was still living on Nantucket, working at his parents’ tool-rental business. He would get out of work, take the ferry to the mainland, drive to whatever show he was performing at and then sleep in his car in Hyannis and take the early boat back home.

In 2017, he moved to the MetroWest area outside Boston, with his wife and their three kids. Glowacki started his stand-up journey later in life, in his 30s, at the time he was also just starting a family. It put him at a crossroads.

“I was going to have to make the choice whether to move to New York or L.A., which is kind of what you have to do,'' he said. “And I chose to start my family and keep my roots here. That might have hurt me in terms of big-market exposure, but I think I make up for it by working my butt off.”

During the pandemic, when many comics and other live performers were sidelined, Glowacki kept hustling, finding ways to perform outdoors, at drive-ins, parks and outdoor dining spaces, or reduced-capacity indoor spaces when allowed. He performed 250 shows in 2021, and plans to do even more than that in 2022.

The support he received from the island community, the place where he grew up, has been incredible, he said. Hundreds of people from Nantucket, year-round and seasonal residents, bought tickets to the Wilbur show.

“People want to gather around something that makes them feel good. I’m not out here trying to hurt people’s feelings, smacking people on stage,” he said. “It just feels like people rallied around this for whatever reason.”

Glowacki’s comedy, as he describes it, feels like home, sitting around the barbecue having a couple of beers, laughing about whatever comes to mind.

“I want it to feel welcoming and conversational. I don’t want to talk about anything that is going to make half the people not want to be there,” he said.

Glowacki will perform a full hour at the Wilbur. It is a collection of his best material, from the hundreds of shows he has performed over the last year-plus.

“I’m going to deliver the best of all the material that I’ve done so far, and just take a snapshot of where I am right now and have it forever,” he said. “Who knows? This could be the biggest it ever gets.”