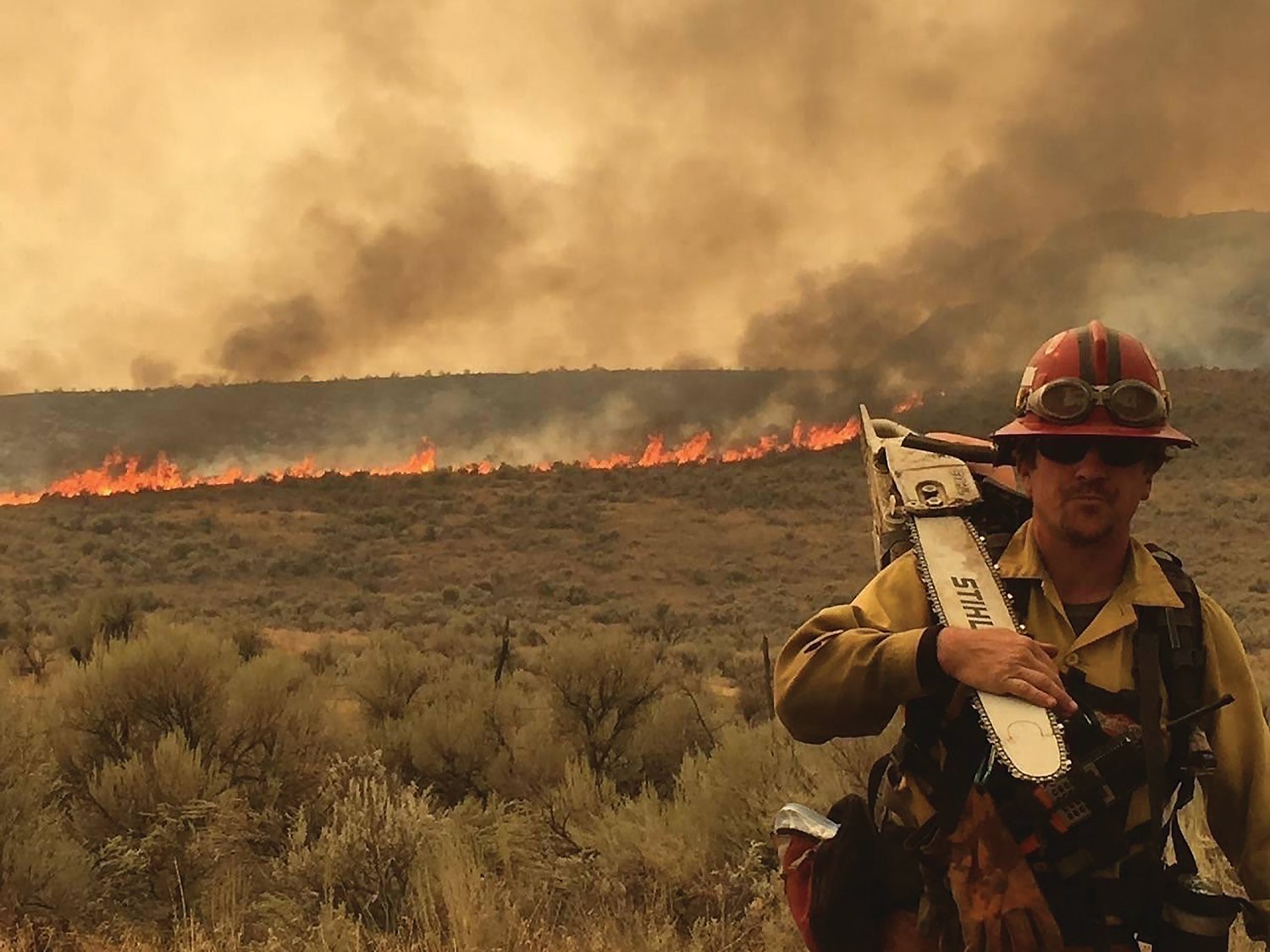 Two weeks into the largest wildfire in New Mexico’s history, Richard “Rico” Schraff realized the day he was dreading had finally arrived, announcing itself in the form of pummeling black clouds in the mountains north of where he was camped next to the interstate highway.

“It’s here, backing down the mountain, chewing its way down to the structures we’ve been preparing now for days,” he wrote that night in his journal. “Today is the day we hoped wouldn’t come.”

The next morning, Schraff, a property steward for the Nantucket Land Bank, would head back out to the front lines, just as he’d done for the past two weeks, just like he’s done for over 100 wildfires along the West Coast and in the Rocky Mountains for the past 25 years. The thought of heading back is both exhilarating and completely terrifying at the same time. It’s almost impossible to get a full night’s sleep.

“It’s moving faster than we expected. It’s the largest backing fire I have ever witnessed,” Schraff wrote. “The fire itself is nearly 90 miles long, at least four distinct massive smoke columns reaching thousands of miles up into the atmosphere, to highlight its enormity. Four hearts breathing in the oxygen and exhaling its waste into the sky.”

All that Schraff could do that night was watch. The Calf Canyon wildfire was spreading rapidly through the bone-dry pine forest outside Las Vegas, N.M. The town of 13,000 people felt like a ghost town.

Around the base camp, the smell of burning pine was overwhelming. It was hard to see the sun from the front lines. The horizon to the north was a permanent thick cloud of dark gray and black smoke, nearly 300,000 acres thick.

Each morning, Schraff said he woke up with a quarter inch of dust powdered on top of him. He relayed that information to Nantucket Today on a “burner phone.” His main cell phone had exploded in the fire earlier that week.

“Lately they’re way more intense,” Schraff said about the forest fires. “They burn hotter, meaning when they get going they get up in the canopies, hundreds of people fighting it, whereas a normal fire is just a few people on the ground. Depending on the area, there could be a lot of fuel loading, the dead down stuff that’s combustible that’s ready to burn.”

Two weeks earlier, Schraff was n on Nantucket, 2,000 miles away from the Calf Canyon fire. He hopped on a plane to Denver the day after he got the call from the U.S. Forest Service, telling him it was now or never to join the front lines. From Denver, he took a bus due south, where the fire had already charred nearly 100,000 acres of pine forests and neighborhoods, scorching everything in site.

In forestry terms, wood is called fuel. In the case of the Calf Canyon fire, the overgrown forest around Las Vegas was like a matchbook waiting for a spark.

Controlling a ravaging wildfire becomes a matter of cutting back that fuel, creating firebreaks around neighborhoods and installing sprinkler systems around mountainside houses in the fire’s path. One of those houses was the former compound of the late actor Patrick Swayze.

It’s exhausting work. This time Schraff was one of more than 3,000 volunteer firefighters battling the blaze. It isn’t new to him. Somewhere along the line, he lost track of the number of wildfires he’s fought. He guesses there have been somewhere between 100-150, in total.

There isn’t a state along the West Coast where he hasn’t fought a wildfire. The majority of those were in Oregon, where Schraff was a full-time captain and engine boss before moving to Nantucket in 2015.

One week into the Calf Canyon fire, he wrote, “Not even sure of the day of the week at this point because things tend to blend when you’re averaging five to six hours of sleep a night. Our roving strike team of engines has covered the expanse of this fire, which is a huge area. Over 200,000 acres of burnt and still burning land.”

Five days later, he wrote, “An eerie feeling when the column leans over blocking out the sun and things get still. The animals know and they’re quiet as they move. The trees seem to know as well . . . Not knowing but only hoping that what we did may help the survival of some of the buildings. The mountainside cabins we prepped are now surrounded by fire. Too dangerous to stay. We pulled the cords and pulled out.”

Sixteen days into fighting the fire, Schraff’s shift was up. He traveled back to Nantucket.

These days, he’s on call for one or two fires a year, depending on how much time he can take off from the Land Bank.

“You’re not only saving trees, you’re saving communities,” he said.

Schraff, 52, grew up in Connecticut, but visited Nantucket in the summers with his parents. In 2015, he was on-island, taking care of his parents’ house, and thought to ask the fire department about the island’s prescribed burn program. They referred him to the Land Bank, which also happened to be hiring a property steward at the time. Schraff was the last of 50 applicants to send in a resume. He landed the job.

He likes to say the Land Bank job allowed him to trade his chainsaw in the mountains for a guitar on the beach. Walk by his house and there’s a good chance he’s playing guitar on the front steps. He’s become regular at open mic nights.

When the calls come in from the forestry service, it’s typically July or August. The assignments typically last two weeks. Getting a call this early in the year is unusual, he said.

“I’ve never been out this early. I’ve been doing this since 1998. Even in Oregon in the heart of things, I never got called out this early. July is usually the tipping point, but fire season has extended by a month on either end,” he said.

In early June, the New Mexico fire was estimated to have burned approximately 315,000 acres, according to the fire data site New Mexico Fire Information. It is just over 50 percent contained, spreading through Ponderosa pine forests as the wind picked up. The National Interagency Fire Center anticipates full containment will not come until the end of July.

“It’s windy and dry,” Schraff said. “We’re on the biggest fire in New Mexico’s history. That’s what they’re struggling with. Fuel moisture is 4 percent, which for this time of the year is unheard of. It’s volatile. Available fuels are timber dry.”

“We may be putting out fires in the wilderness, but often the wilderness is on an urban interface in these mountain areas, which makes it extremely difficult.”

The fire started in April as a prescribed burn that caught a tailwind and got out of hand. Two weeks in, it merged with another fire, the Hermits Peak fire.

Prescribed burns are a practice conducted across the country, primarily in the wildfire-prone West Coast and Rocky Mountain states, as a means to reduce the amount of dry wood in the area. By reducing the fuel, you carve out a firebreak, the idea being that a potential wildfire would ideally be cut off at that point.

Schraff himself has been on prescribed burns on Nantucket, as recently as late May, in Head of the Plains. Those burns on the island are less about preventing wildfires and more about ecological restoration of grasslands that would otherwise face encroachment from shrubs and other invasive vegetation.

The prescribed burn program on Nantucket is also one of the main reasons Schraff keeps going west. Fighting fires out west helps him maintain his qualification as a burn leader on the island through the U.S. Forest Service.

There have not been issues with prescribed burns on Nantucket in over a decade.

The burn that caused the fire in New Mexico is a blemish on the program, he said.

“It’s a sensitive issue,” he said. “The prescribed burns we want to be in good standing to create preventative measures to save land. But when they get out of hand they leave a black eye.”

There is merit to prescribed burns, he said.

“We should have been letting some of those fires naturally burn to consume fuel,” he said. “Now, where we would have had a 20-year fuel buildup we have a 100-year buildup. It destroys everything, the mineral content in the soil, the trees. It can destroy hundreds of trees within minutes, and that will take years or hundreds of years to grow back.”

One of the biggest issues with the Calf Canyon fire has been the unpredictability of the wind. At one point, Schraff said it was spreading on both ends, a two-headed monster leaving firefighters scrambling.

Fires like these are not something that people on the East Coast deal with. It takes full immersion to understand the massive and overwhelming power of a wildfire working up a mountain, and the devastation it leaves behind. More than anything, it can still be terrifying, even for someone who’s been there over 100 times.

Writing in his journal gave Schraff a sense of solace when the world was literally burning down around him.

“Our mission the last two days has been preparing structures ahead of the fire front, which is now at our doorstep as I write this,” he put in his journal. “Time to go for now. From the fire line on the Calf Canyon Fire.”