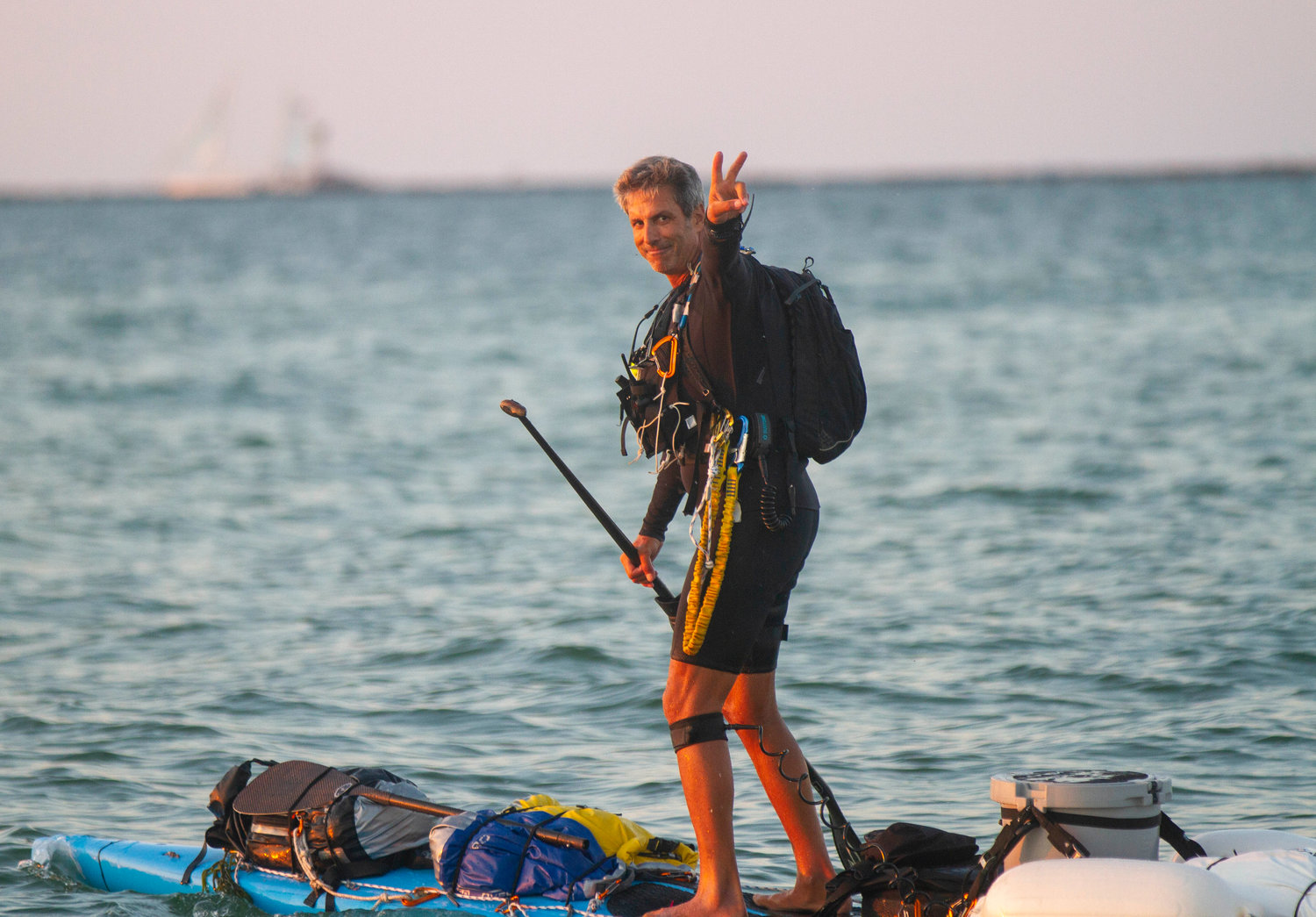 When you read this, sitting somewhere with dry land beneath your feet, Adam Nagler will, in all likelihood, be miles offshore, maybe as far as 70 miles, somewhere in the Atlantic Ocean, between North Carolina’s Cape Hatteras and Brant Point, alone on his 14-foot paddleboard.

“What might seem risky for one person is not necessarily as risky for another if they spend a lifetime preparing and managing the risk,” he said.

“The process takes time, and the process is hard. If you set really tough goals, and you set them way out in front, it’s worth all the time in the world to get to them.”

The 55-year-old Santa Barbara man is, for the second summer in a row, embarking on an epic paddleboard journey spanning hundreds of miles along the East Coast, eventually ending on a Nantucket beach.

It may be the instinct of an extreme athlete, but this year he plans to make the journey even more difficult, starting further south, and spending more time offshore. He was slated to take off June 17, although his schedule will ultimately be decided by Mother Nature.

Why do something so risky? There are countless ways this could end badly. Besides the most obvious danger, drowning, Nagler could be hit by a boat, he could be attacked by a shark, stung by jellyfish, run out of food or water, become exhausted, get caught in a fast-moving tropical storm, or even just a thunderstorm, or he could become overexposed and hypothermic.

When asked why, Nagler is reminded of the famous John F. Kennedy quote about going to the moon.

He added that risk is in the eye of the beholder. For him, someone who has spent thousands of hours on a paddleboard, hundreds of hours studying the risks involved and preparing, it doesn’t seem as life-threatening as it might to a layman.

Nagler’s journey really began in his mid-40’s. He was working a desk job and out of shape, getting as, he called it, mean and fat. That’s when he was diagnosed with a rare bacterial infection that required open-heart surgery. The brush with death motivated him to change his life in just about every way imaginable.

“My ongoing mission is to crush that kid, that former version of myself,” he said. “And leave it all on the field of middle age en route to become a world class ultra-endurance athlete.”

In 2014, he began training for what he calls his own personal “Sufferfest Tour,” a series of self-created ultra-endurance trials. His first was a 1,000-mile run, bike, in-line skate and stand-up paddle through Santa Barbara County. In 2018 he ran 127 miles from City Hall in New York City to Montauk on the tip of Long Island, followed by a nearly 400-mile bike ride from Montauk to the Brooklyn Bridge, and a 250-mile paddle from the Brooklyn Bridge to Nantucket. Then finally, last year’s epic paddle from Kiptopeke, Va. to Nantucket.

“Half the time I’m out there having the time of my life,” he said, “enjoying every single moment of the experience, the challenge, the joy of being on the water, seeing birds and the amazing sunsets. The other half of the time I will be in the wilderness of suffering and pain. I can’t say I enjoy the suffering but it is what I’m good at.”

His only lifeline to the world is a cell phone, which he can only use sparingly, and a Garmin GPS with an emergency SOS button. But he’s upping the ante this year, not only starting further south, but also scheduling far fewer stops on land. He is hoping to come ashore just three times to resupply: the first time after a 120-mile paddle from Cape Hatteras to Cape Henry, Va., then 150 miles before stopping in Cape Henlopen, Del. Then what he says will be the most difficult trek by far, 190 miles through multiple shipping lanes to Moriches Inlet on Long Island.

If all goes according to plan, and Nagler admits that's a big if, that stop in Moriches Inlet will be his last before he paddles the remaining distance to Nantucket.

Some might imagine that aside from the grueling nature of the trip, it might get boring being completely alone for nearly two weeks in the middle of the ocean. No music, no screens, no Internet, no distractions. But Nagler said that is precisely what he needs. And he always has his Monty Python skits.

“I’m literally in my head in a constant state of mathematics, course correction, safety checklist,” he said. “In terms of sanity, when I start to go insane, I start doing Monty Python routines to myself. But I have to keep my mind really focused at all times because one little letdown in focus has a cause and effect that’s monumental.”

Upping the difficulty is no small matter. At the end of his trip last year, he was completely annihilated. He lost 37 pounds over the 450-mile, 24-day journey. When he arrived at Brant Point his left leg was swollen and deeply bruised, his feet had ballooned from swelling, his toes mangled by cellulitis, a deep infection of the skin that he picked up in the waters off Maryland.

When he went to sit down on the sand he howled in anguish, adjusting his leg in just the right position to make the pain manageable.

There was a point during his crossing last year where he had to pause his journey, around the Maryland-Virginia border, due to Hurricane Elsa bearing down on him. He took that time to get the cellulitis treated, and after nearly a week onshore, he launched approximately 50 miles north of where he came in. For people following along, it seemed like an insignificant detail. But for Nagler, it felt as though he had failed.

“I want to really test myself, and this is the real test,” he said. “The biggest challenge is (the start). Cape Hatteras sticks out there and it’s angry, angry like the mouth of the Columbia River is angry.”

He is once again doing it all as a fundraiser for Fairwinds, Nantucket’s counseling center. By the beginning of June he had already raised $15,000, well ahead of where he was last year, when he ultimately raised $74,600 for Fairwinds.

Nagler is also doing this trip in memory of his lifelong friend John Loughlin, who died in 2004; and for Annie Backus, who was a nurse at Nantucket Cottage Hospital for 46 years before retiring last year.